10 MUST SEE SIGHTS AROUND TRYAVNA 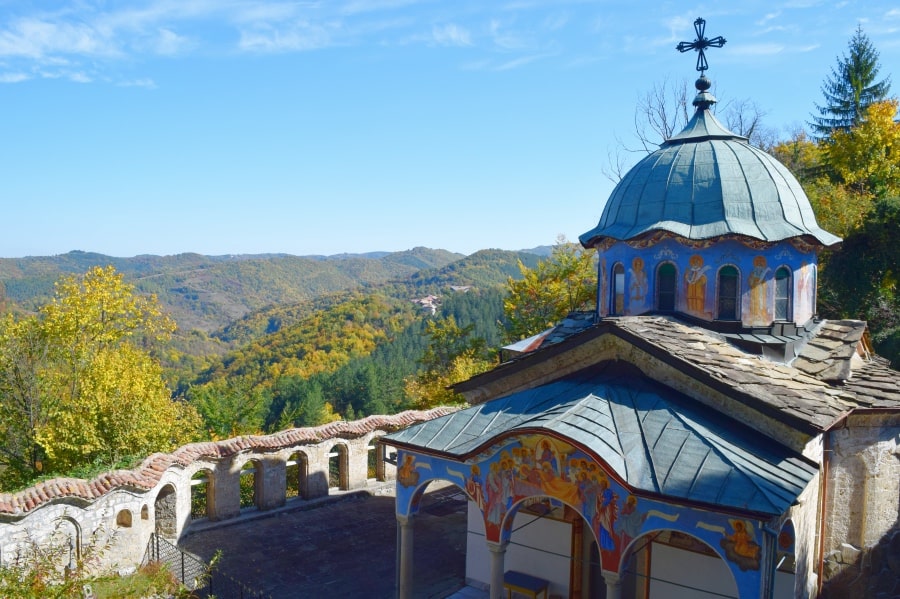 Especially for all our guests, we from the Kalina Palace Hotel have prepared a short list with interesting sights around Tryavna, which are a must-see while being our guests. As you already know, Tryavna is located really close to the perfect geographic centre of Bulgaria that makes it both easily accessible from any place in Bulgaria, as well as a great location for walking round and about. And trust us, the places, which you can see and visit are really a lot!

Do you know that from the town centre of Tryavna, if you take a look towards the hills of the Balkan Mountains, you can actually spot the Shipka monument? Yeah, that’s right! That is a place, which does not need an introduction and further proof why it’s really worth visiting. In order to get to the National park-museum Shipka from the Kalina Palace hotel you need less than an hour to travel the distance of 40km. The road lingers through a few picturesque villages and neighbourhoods, past the open-air ethnographic museum Etar in order to get to the in order to reach the desired altitude of 1326m, where the monument itself is located.

Until the beginning of the 50’s of the 20th C. it used to be named St. Nicholas and then until 1977- Stoletov Mount. The National Park consists of 26 monuments, amongst which can be seen part of the rebuilt positions, batteries and dug-outs of the defenders of the pass during the Russian-Turkish Liberation War (1877-1878). More about the monument itself you can find here.

An intriguing destination that is of great interest to the visitors of Tryavna is the Uzana area. It is located about 45km away from the town of Tryavna and only 25km away from Gabrovo. Amongst the unique nature and typical topography of the Balkan Mountains, the Uzana area is situated. That is where the marker foe the geographic centre of Bulgaria is placed.

Uzana covers vast parts of the Balkan are with average altitude of 1120m that occasionally reaches 1400m above the sea level.

The strongly manifested Balkan topography with long and steep hills, a variety of hotels, huts and holiday homes make the Uzana are a preferred winter resort with 8 skiing slopes. Each of those has a different difficulty level and offers the perfect opportunity for practicing winter sports.

During the summer season the Uzana area is equally attractive. There are opportunities for exploration and alternative tourism. To the Visitor’s Centre there is a Children’s Nature Academy established, that organizes different exploration and educational games in the especially furnished rooms, as well as a walk along the Forest path behind the Information Centre. 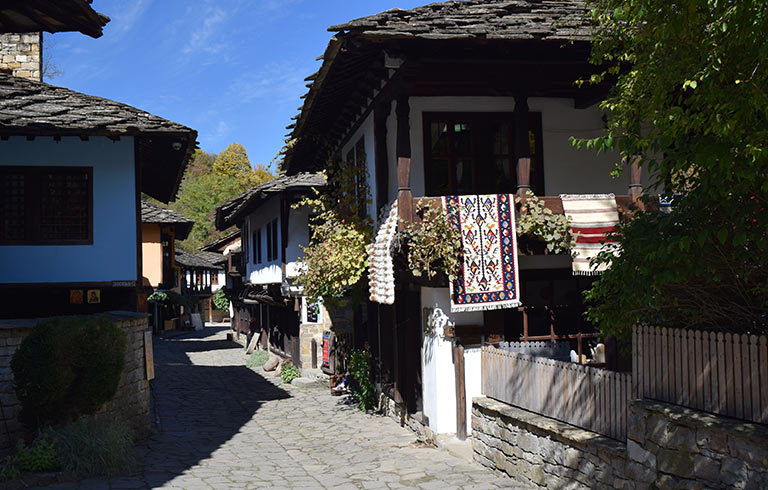 The single open-air ethnographic museum Etara is located approximately 25km away from the Kalina Palace hotel. A magnificent place that we strongly recommend you to visit.

Here different objects are exhibited- some of them restored on spot (status quo), original facilities re-built on spot, as well as buildings, recreated according to preliminary plans and photos (original copies).

The youngest of visitors are also taken into consideration. Here learning from experience every little craftsman can learn or find out some interesting new skills they never thought they have. 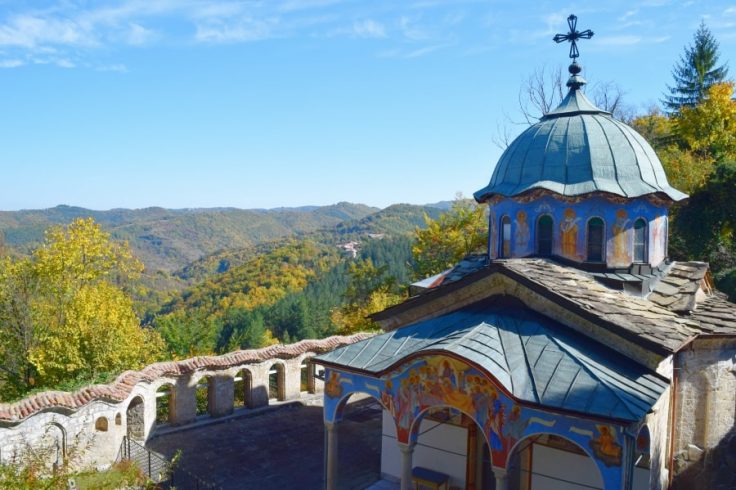 Situated less than 30km away from the town of Tryavna, the Sokolsky Monastery is one of the places we strongly recommend not only to all our guests but to everyone, as well, to visit. The Sokolsky Monastery “The Assumption of the Holy Virgin” is an active nunnery, although from its establishment in 1833 till mid 20th C. it used to be a friary. His founders are Abbot Yosif Sokolsky and hieromonk Agapi, who initially raised a small wooden church and added to it a house.

What we can see today has been built in the year after that with free-willing donations by the people from the nearby villages.

Of great interest is the stone fountain with eight pipes in the shape of hawks, which is a work of the famous Bulgarian building master Kolyu Fitcheto. Nowadays its one of the symbols of the monastery.  A cobbled pathway takes you to the monastery church itself, which is mural-painted, both from the inside, as well as from the outside. To the right of the church building there is a small cave, a subject of numerous legends. The monastery is a place with strong vital energy and it’s a favourite place of many visitors.

Before or after you have visited Etara, you can take a walk along the eco path Etara-Sokolsky Monastery. As we have already explained a few lines above, by car it’s only a few kilometres away from Etara to reach the monastery, however for the fans of hiking there is an alternative route. It only takes about an hour and a half to walk up to the monastery and the route is suitable not only throughout the year, but also for beginner hikers or for groups with children. The eco path begins right opposite the large parking lot in front the OEM Etara. Along the way special rest stops have been design for tourists to stop and relax on their way to the monastery. 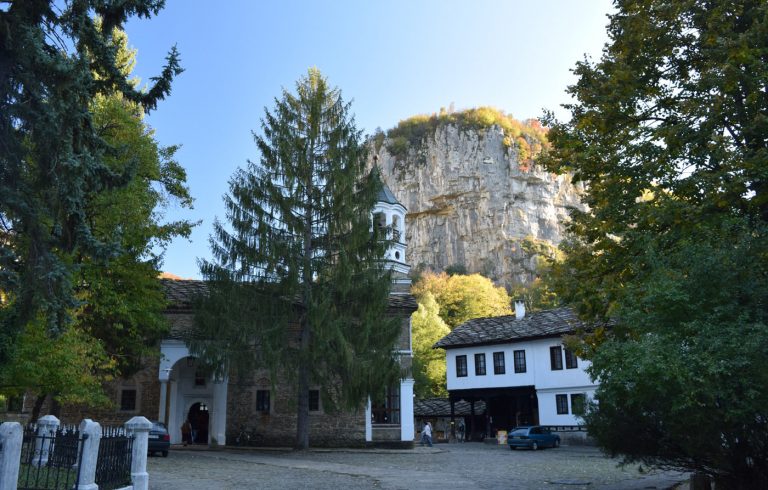 Only 20km away from the Kalina Palace Hotel one of the most significant spiritual and cultural centres of Bulgaria is located. One of the sights in the area of Tryavna that you should not miss out on! The Dryanovo Monastery “St. Archangel Michael” was built in the 12th C. A.D. about 2km away from its present location. Although it has been burnt down more than once, it has managed to survive the challenges of the era.

The Dryanovo Monastery is one of the largest and most significant educational centres of the Bulgarian Revival period. Here many famous Bulgarian revolutionaries have been hiding, including Vasil Levski and Georgi Izmirliev, while the monastery had actually turned into a home to Bacho Kiro and priest Hariton. You can find out more about the history of the monastery in the exposition of the adjacent history museum.

The picturesque location of the Dryanovo Monastery in the region of the Balkan Strazhata (the Guardian) Plateau and the nearby Andaka River, turn the monastery into a favourite destination of every Bulgarian.

Once you have made it to the Dryanovo Monastery there is no way to miss to visit the Bacho Kiro Cave- the first landscaped cave in Bulgaria. It’s located only about 300m from the Dryanovo Monastery. In order to reach it you have to cross the bridge over the Andaka River and from there make your way along the designed eco pathway in order to reach the cave. It’s one of the most interesting and remarkable underground creations of Nature. The cave is named after one of the most famous heroes of the April Uprising, who had been hiding there- Bacho Kiro.

The cave itself is a 4-level labyrinth with total length of galleries and their branches about 3600m. The cave maintains constant temperature between 10-13oC throughout the year.

If you decide to take a walk through the cave, there are two routes: a short one and a long one. The short route takes about 20min without a guide, while the long one is about an hour with a guide.

The historic and architectural reserve Bozhentsi is the next must see sight when you are staying at the Kalina Palace Hotel. If you wish to take a walk to the tiny Gabrovo village you will have to spare between 2 to 4 hours depending on your pace as the walk takes you through a scenic forest trail. If you’d rather take a car, the distance along the main asphalt road is about 25km.

The tiny picturesque village of Bozhentsi was declared a historic and architectural reserve in 1964. In it the houses have preserved their authentic Revival appearance. Most of the buildings are two storey houses- the first floor used to be a shop, in which the craftsmen used to offer their production, while it was on the upper level where they used to live with their families.

Some of the places of interest in Bozhentsi are the old church The Holy Prophet Elijah, the Cell school, the New school, the museum houses Grandma Rayna and Doncho the Priest.

The architectural and historic reserve Bozhentsi is going to take you back in time to the Bulgarian Revival Period and you are going to have the chance to indulge in its lifestyle and traditions.

If you are a fan of light hiking and walks out in the open, then the next entry on the list is especially for you! The Bozhentsi village is one of the favourite places of both the residents of Tryavna, as well as of the guests of the town. Surrounded by lush vegetation, the tiny village attracts hundreds of visitors with its authentic look, original architecture and beautifully decorated with flowers decks and balconies. The following routes will take you through picturesque areas in order to reach the desired destination- the village of Bozhentsi. Please, note that all routes take you to a specific place that resembles a crossroad and from there on you need to follow the blue marking. 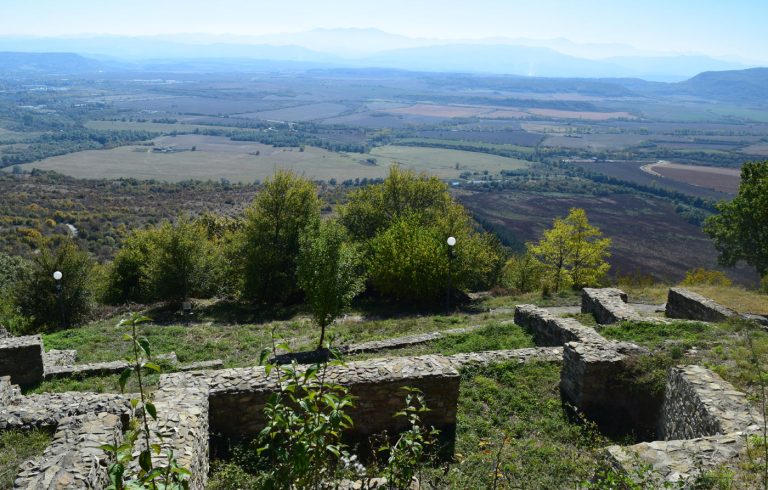 Since ancient antiquity the geographic and strategic location of the area has been highly appreciated.

You are definitely going to enjoy a walk along the cobbled stone streets. You can take a peek into the Noble Church in the Citadel, you will visit some of the preserved towers along the fortress wall, and if you dispose of enough time, you can take a stroll through the numerous excavated residential buildings in the suburbs of the fortress.

In the several especially built houses you can get yourself familiar with the history of the fortress and the stages of its research.

From the top of the fortress there is an amazing view revealed. A view that you are going to long remember! 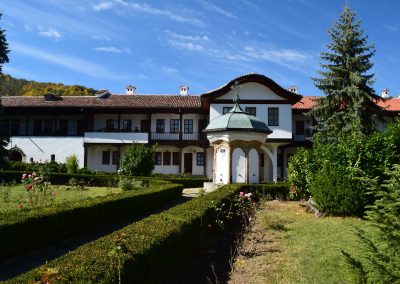 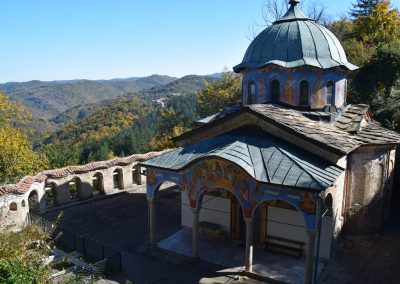