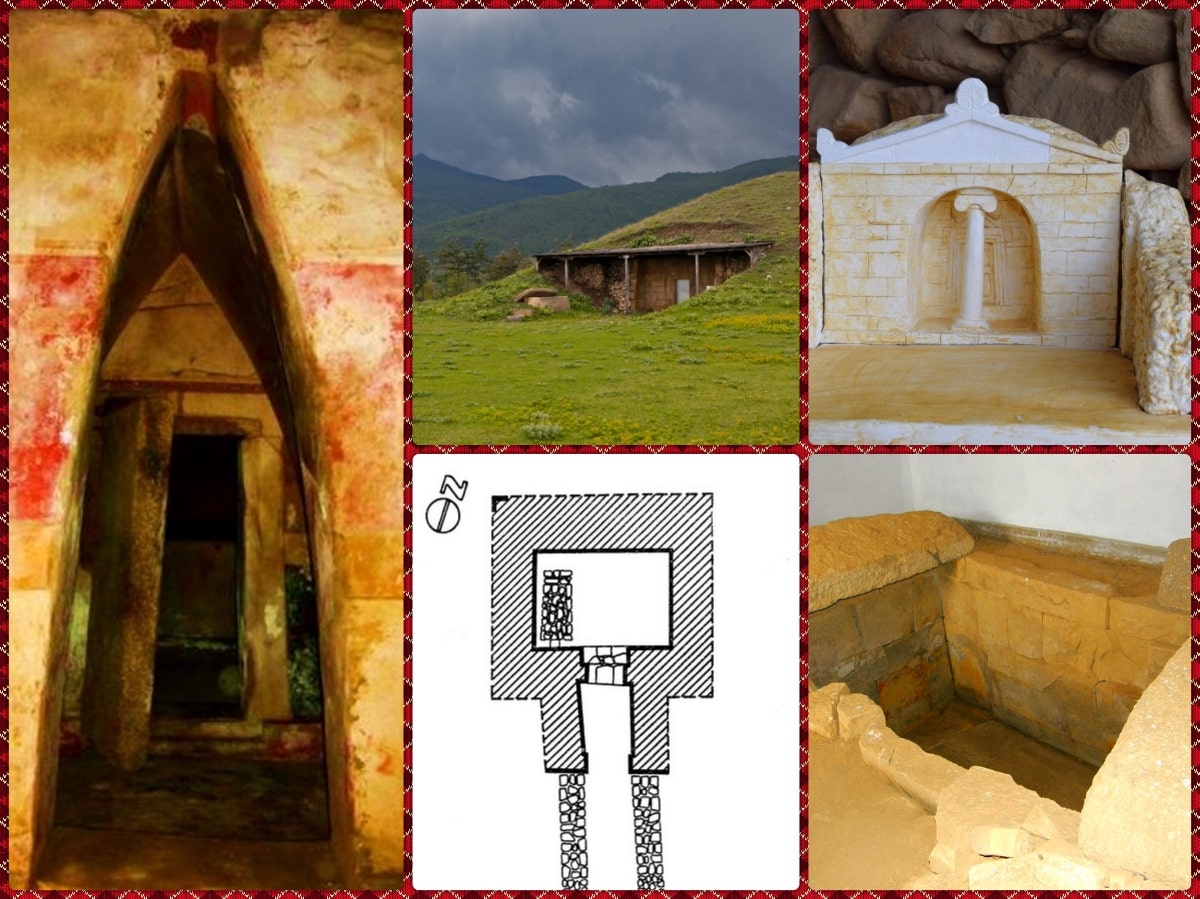 In this article we continue our tour through the Valley of the Thracian Kings. Unfortunately, entering some of those is in best case scenario very difficult (not to say impossible), due to conservation works. However, we would still like to make you familiar with those even if just virtually.

The mound necropolis, that includes the temple in the Shushmanets Mound, consists of the mounds of Helvetia and the Griffons that have been opened for visitors for a few years now. It was excavated in 1996. The temple dates back to 4th C B.C. and had been used as a burial tomb, as well. This is the single Thracian temple that boasts colonnade both in the anteroom, as well as in the main chamber and that is what makes it unique of its kind. The original construction of the temple is dated as early as 4th C B.C. 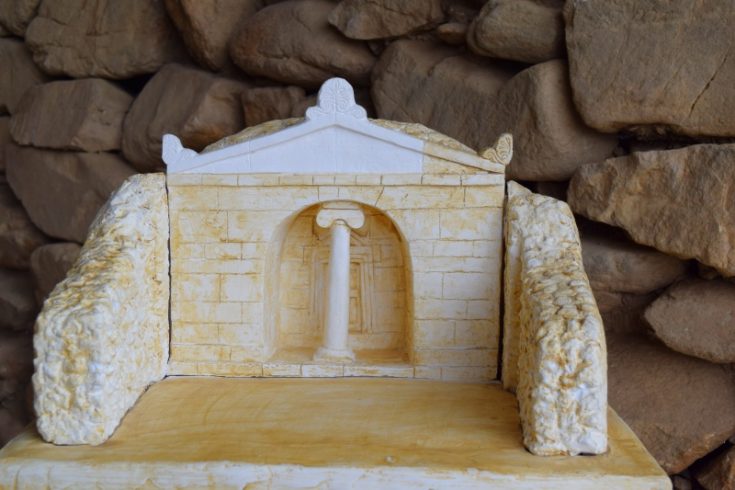 The temple has the following architectural planning: the tomb consists of a wide corridor, an imposing façade, an anteroom with semi-circular arch and a round domed chamber. In the middle of the anteroom there is a beautiful Ionic column, while in the main chamber a Dorian one can be seen.

During the excavations bones of six animals have been found in the anteroom- 4 horses and 2 dogs that are believed to have been sacrificed during the mystic rituals that accompany a Thracian burial ceremony. The burial chamber used to be shut by a two-winged solid stone door, the wings of which can nowadays be seen in the corridor of the tomb.

Another point of interest is the decoration of the burial chamber itself. The surface of the walls has been divided into three layers that represent the beliefs of the Thracians for the laws of the Universe- the Underworld, the Real World and the Afterworld. In the chamber there used to be a burial bed that had unfortunately been destroyed during the numerous entries into the tomb over the ages.

That is one unique sarcophagus-shaped Thracian Tomb nested in a mound- Svetitsata (The Saint). It was discovered in the summer of 2004 in close proximity to the town of Shipka. It was constructed with stone blocks, laid it a large pit and covered with six trapezoidal stone slabs that are over 2m long. These have the shape of parallelepiped and that is what defines the sarcophagus shape of the tomb. 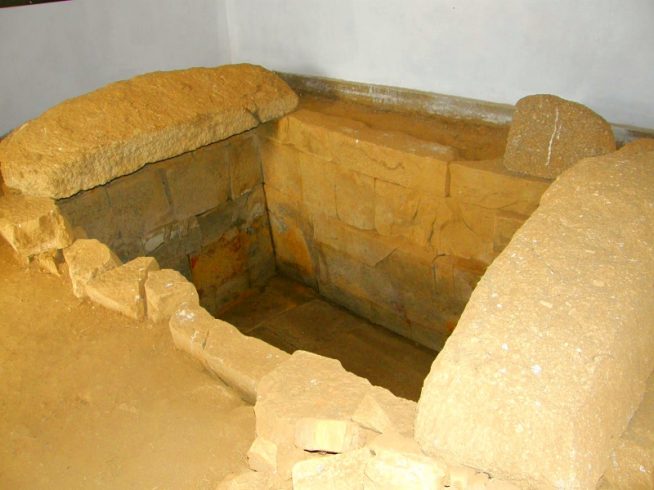 The burial chamber used to be skillfully painted. That we can conclude from the partial remains of coloring on the walls. On the bottom of the sarcophagus human remains have been found that are believed to be relicts of a soldier, buried in his full armor. Some scientists are brave enough to claim him to be the Odrysian King Teres I.

Of great interest are the artifacts found in the tomb- a set of iron armor, a seal ring, a golden phial, known as the mask of Teres from Svetitsa. The later is one of the symbols of the Valley of the Thracian Kings. It weighs over half a kilogram of almost pure 23 carat gold. Following the dating of the style of the mask we can date this unique artifact to the mid 5th C B.C. Its dating is the main source of information regarding the dating of the usage of the tomb itself.

Just like with the Svetitsa Tomb in order to visit the Large arsenal Mound you are going to need to make an enquiry with the local historic museum Iskra in Kazanlak, since during a previous enquiry of ours we found out that entering this tomb is possible only after an arrangement with a local guide, provided by the museum. 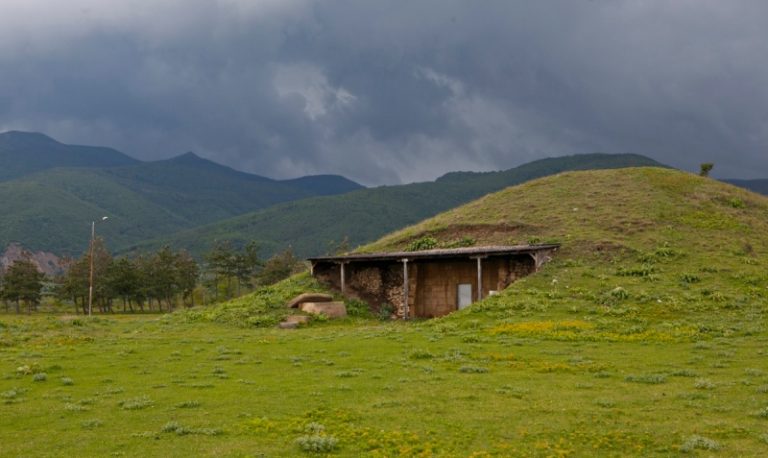 The Thracian tomb in the Large Arsenal Mound was unearthed in 1995. Geophysical research was made that proved an anomaly in the southern periphery of the mound. That gives the TEMP expedition the opportunity to make the corresponding plans of how to approach and organize the excavation of the mound.

This is the most representative amongst the stone Thracian tombs in the Valley of the Thracian Kings. It is also the most perfect one in terms of planning and construction, which makes it an unique sight amongst the preserved similar buildings not only here, but anywhere in the world. It is dated back to the end of the 5th C B.C. It has an imposing façade, an anteroom and domed chamber. The gated to the rooms used to be shut by two-winged stone doors. The floor of the burial chamber is covered with carefully arranged stone slabs. In the centre of the round chamber on the floor there is a round granite slab with a cove in the middle, around which there are three layers of concentric stone slab circles. Unfortunately, the chamber was found totally empty during the excavations. The burial bed proves a funeral ritual. In the anteroom the bones of a horse have been found, as well as fragments of a gilded breastplate and two pieces of small golden jewelry.

The tomb Sashova Mound was discovered during the international TEMP expedition with leading archeologist Georgi Kitov during the summer of 1995. It consists of a corridor and two chambers, allocated along the centerline, and was built with large blocks of white, red, green and black stone. 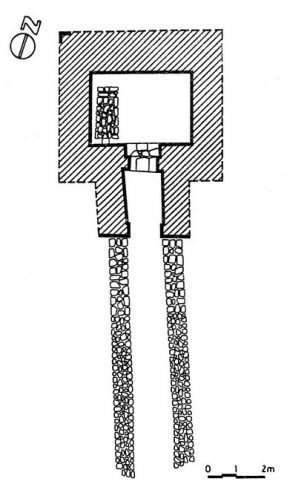 The deceased Thracian ruler was laid on a stone bed along with a large range of burial items- knitted iron shirt, bronze helmet, an iron umbo (the boss of a shield located in the centre), an iron sword, a golden fibula, a silver phial and other ceremonial vessels. On the floor the bones of a horse have been found along with a iron rein and decorations from silver, bronze and iron. The paintings on the walls on the side of the entrance of the burial chamber represent battle and ritual scenes.

According to Georgi Kitov the facility was used during the middle or second half of 3rd C B.C.

We have found out that entering this tomb is again only possible after a booking with the regional history museum in Kazanlak.

Another mound that we still have not had the chance to visit ourselves, but cannot miss out on in this article. The Sarafova Mound is located not far from the village of Kran, about 5km to the north of Kazanlak. It was also excavated by the team of Georgi Kitov and the international TEMP expedition in September 1995. The in-built burial tomb found is dated back to the period 4th-2nd C B.C. 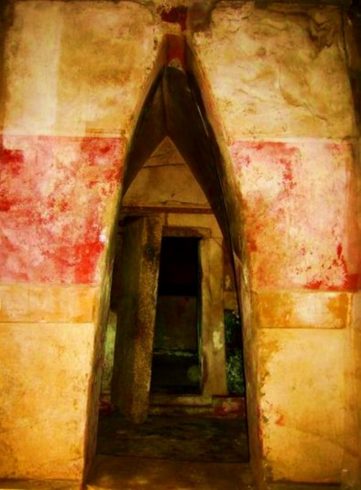 The complex consists of a corridor, built with well-processed stone blocks and two rectangular chambers built with fine bricks. The walls of the chambers are covered with stucco decorated with horizontal layers of white, black, red, orange and yellow paint, which makes it one of the most beautifully painted Thracian tombs.

The tomb in the Sarafova mound had been robbed a long time ago. During the excavation works a few artifacts were found, including the remains of a horse’s skeleton, small golden and silver objects, gilded pottery decorations and amulets.

*At this point we do not have information if visitors are allowed into the tomb even with a pre-booking.

So, we have told you in brief about this fascinating and vast world that we, the Bulgarians, have inherited from the ancient Thracians as their historic heirs. If you ever have the chance, make sure to visit some of the abovementioned tombs and temples in order to experience yourself the magic of the Valley of the Thracian Kings. 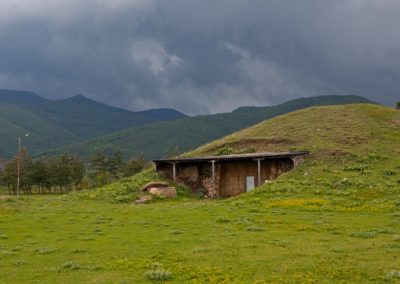 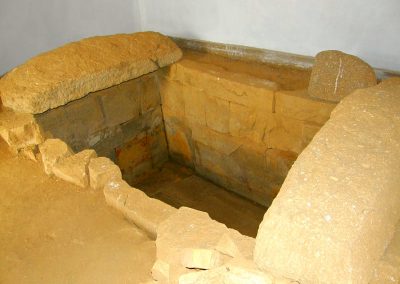 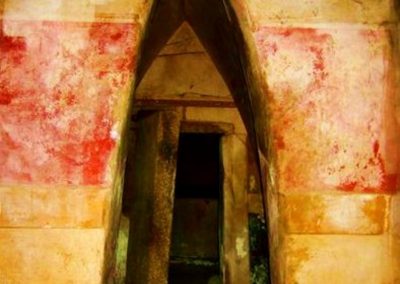 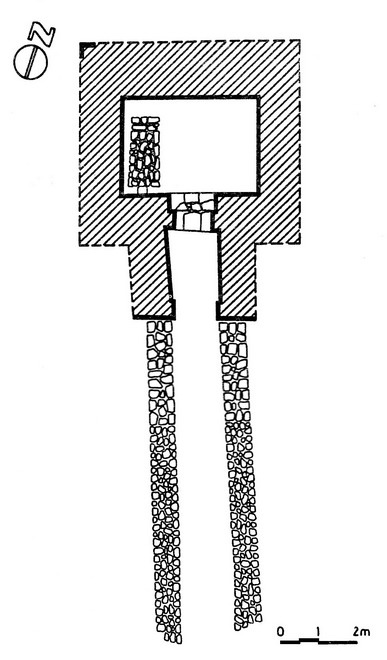 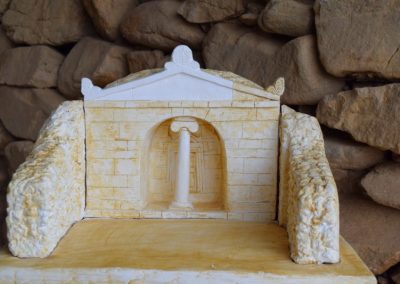