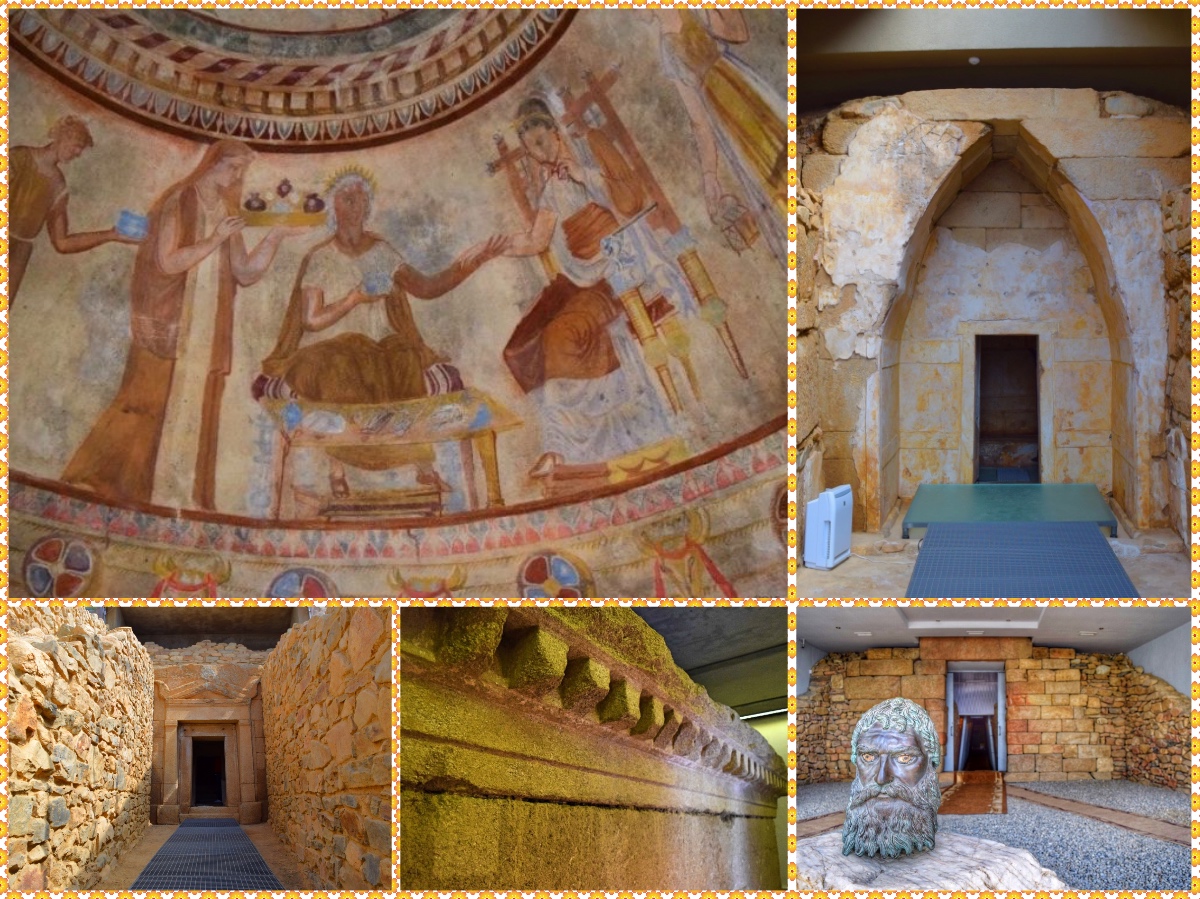 Today’s article we are going to dedicate to the Valley of the Thracian Kings. In a sequel of a few articles we are going to introduce you to the Thracian tombs and temples. Those are places that we definitely recommend you to see while you are being our guests at the Kalina Palace Hotel, Tryavna. And even more than that!

The Valley of the Thracian Kings is located approximately 50-55km away from the town of Tryavna. You need to head in direction Palauzovo village through Etara, continue in southern direction towards the National Monument Shipka and then you make your way down south direction Shipka town. Most of the tombs and temples are situated in that particular area between the towns Shipka, Sheinovo, Kran and Kazanlak.

The name-The Valley of the Thracian Kings, has been granted by archeologists to a particular area with more than 1000 burial mounds, discovered in the period 1992-1997 in the Kazanlak valley. As per 2012 only about 100 out of more than 1000 existing mounds have been excavated.

The burial cult complex Ostrusha is situated at a close proximity to the town of Shipka. In 1993 here a huge complex was revealed, known for its exceptional artistic and historic value. 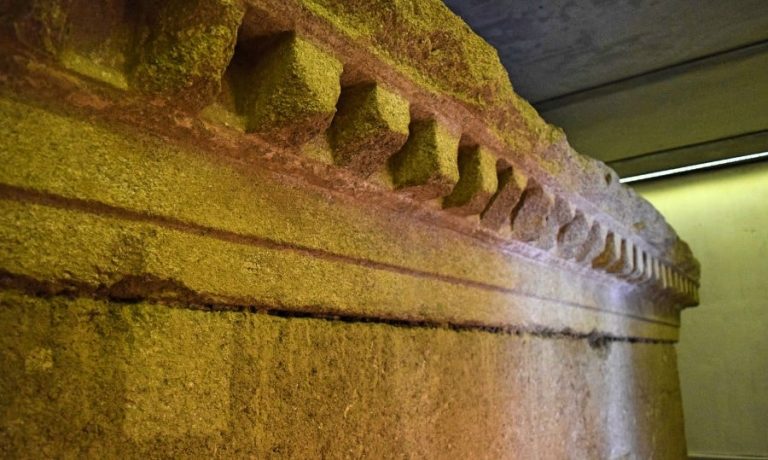 The burial complex includes six rooms. The most impressive one of those is the monolith chamber, constructed with well-cut granite blocks in rectangular shape. The ceiling of the chamber is coffered and covered with paintings, some of the details of which used to be covered in gold. Those images on the coffered ceiling most likely represent the deceased along with their family.

Unfortunately, the tomb had been robbed as early as the Antique period. Only the south-west wing remains untouched, where a horse with lush horse armor had been buried. That’s where a gilded breast collar and two silver vessels were discovered during the contemporary excavations.

The tomb Golyamata Kosmatka was discovered in the autumn of 2004 during the archeological research of the international TEMP expedition with leading archeologist Georgi Kitov in collaboration with the regional historic museum Iskra, Kazanlak town.

The mound had been formed during 5th C B.C as a holly mound. A bit later a trench was dug and that’s how the monumental temple was constructed and awaits thousands of visitors even nowadays. 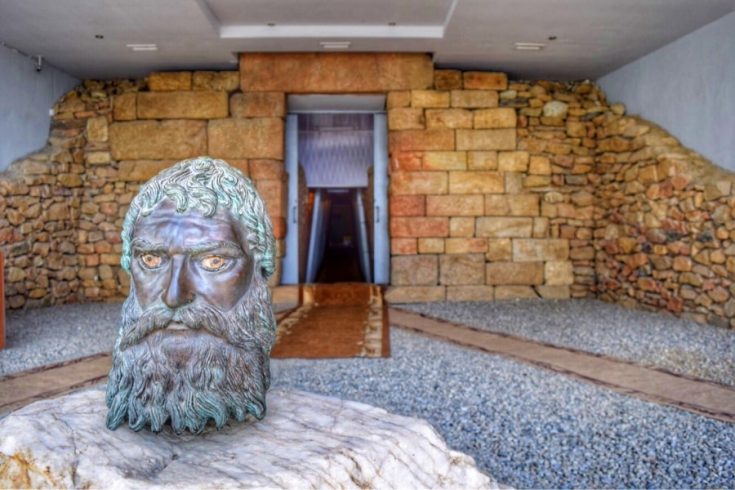 The bronze head, that is believed to be the bust of Seuthes III, in front of the facade of the Golyamata Kosmatka mound

The temple is going to fascinate you with an imposing façade and three halls. The building material here is again the already familiar well-cut stone blocks. Most intriguing is undoubtedly the third hall that represents a sarcophagus-like chamber, constructed through the carving of a single monolith stone block, on top of which a second stone block had been placed, shaped as a double-pitch roof. The entrance of the chamber used to be closed by a two-winged marble door, each side of which had an engraved image of the Gorgon Medusa.

A second façade followed by a 13m stone corridor with a wooden roof lead to the façade of the temple itself. In that very area is where the carefully laid bronze head had been found that the scientists associate with the historic figure Seuthes III. That gives us a reason to believe that it is the famous ruler himself buried here. Amongst the other findings a must-mention are a golden wreath, a bronze helmet, two knee supports and some fine golden decoration for horse armor.

The Golyamata Kosmatka mound boasts some of the best preserved open artifacts amongst all of the tombs in the Valley of the Thracian Kings.

Helvetia Mound is one of the two newly opened mounds for visitors along with the Griffons Mound.

It is part of the mound necropolis in the vicinity of Mound Shushmanets that we are going to tell you all about in our next article. It is located really close to the town of Shipka. The Helvetia Mound was excavated during the archeological research of the international TEMP expedition with leading archeologist Georgi Kitov back in 1996. 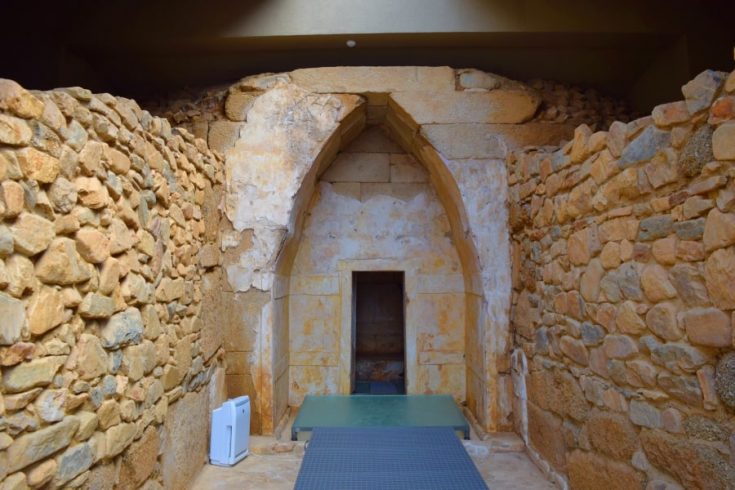 The dromos and façade of Helvetia Mound

The corridor leads to a forth burial chamber and open anteroom, coved by a shared console vault. The dromos had been attached at a later point to the main tomb. That is to be concluded due to the part of the original mortar of the façade walls covered during its construction.

The walls of the burial chamber and the anteroom are covered with mortar that imitates masonry. Through several spots where the mortar has been damaged one can get a sneak peak at another layer of painted walls, which shows at least two different ages of usage according to scientists.

The floors of the chambers are covered with a thin layer of lime. In order for the original floor to be preserved, the tomb is entered along a contemporary wooden pathway.

of the Griffons. The ritual facility was excavated in 1996 as part of the regular expedition of TEMP. Situated between the towns of Shipka and Sheinovo, it has many similarities with the Large Arsenal Tomb. That’s the reason why both the tombs are dated back to the late 5th-beginning of 6th C B.C. 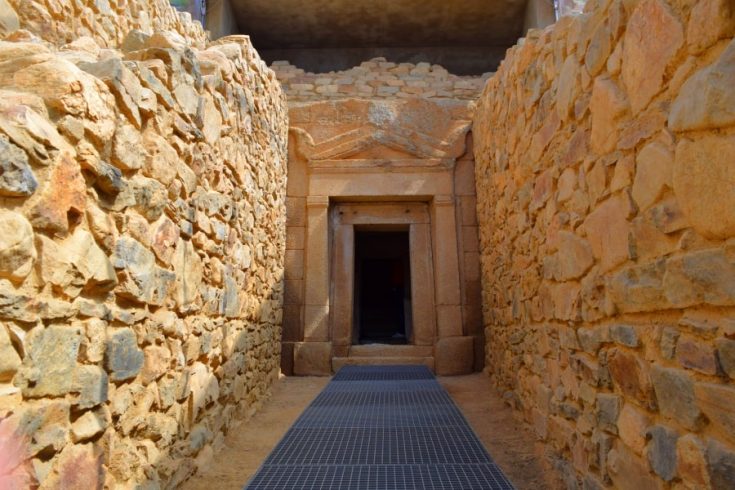 Just like many of the tombs in the Valley of the Thracian Kings the Griffons Tomb had been built into an already existing mound. The layout of the tomb includes a dome chamber, a rectangular pre-burial chamber (that’s why the reference to the Large Arsenal Tomb) with double-pitch roof, flanked by a remarkable façade and a corridor attached later on to it. The entrance to the pre-burial chamber is artistically shaped resembling an aedicule. Here again at least two ages of usage of the tomb have been found, based on the different floor levels in the burial chamber and the extension of the dromos.

The Griffons Tomb is totally worth visiting. The lecture of the local archeologist makes the visit even more intriguing and furthermore gives you the opportunity to ask all your questions!

And for a grand finale we have saved the best for last- the Kazanlak Tomb that every single Bulgarian has heard of!

The Thracian Tomb of Kazanlak is one of the masterpieces of the Thracian building and art. It is most definitely the most famous tomb in the Valley of the Thracian Kings. It is located in the Tyulbeto Park in the town of Kazanlak itself. It was discovered in 1944 during the excavation works in a mound that is part of a larger necropolis, situated in the vicinity of Seuthopolis- the capital of the Odrysian Kingdom. 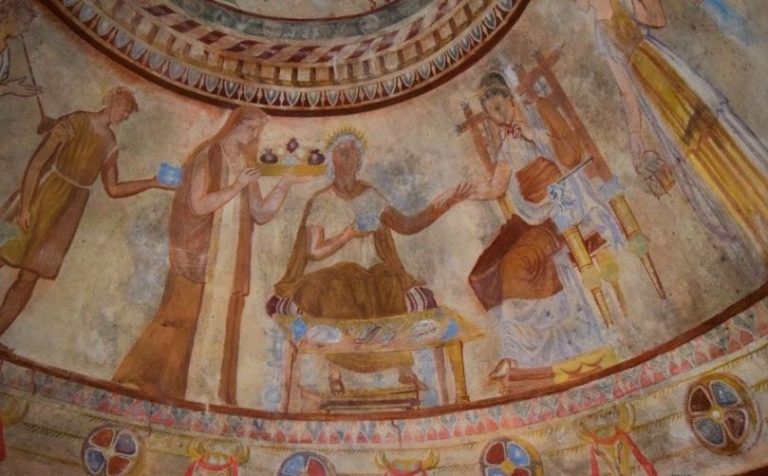 The tomb has the following architectural planning: a burial chamber, covered by a bell-hive dome and a dromos, attached to it. Both the rooms are built with bricks. The entire tomb used to be covered with a stone coating and a mound, build on top of it.

In the tomb the remains of a male and a female body were found and a skeleton of a horse in the corridor. During the excavation of the mound different fragments of pottery were found in the ground, as well as an insignificant number of golden objects. Possibly the tomb had been plundered as early as the Antiquity. In 1946 around the Kazanlak Tomb protective facilities were constructed, the main purpose of which is to preserve and protect the original construction from the harmful atmospheric conditions. Nowadays the access to the original tomb is restricted. However right next to it an exact copy of the original tomb has been built, that can be visited by the tourists. In it photography is also allowed. The Kazanlak Tomb is the very first Bulgarian monument that was included on the UNESCO world heritage list.

In our next article we are going to continue with our suggestions in the Valley of the Thracian Kings! Enjoy your tour! 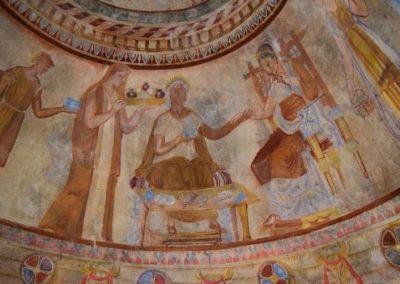 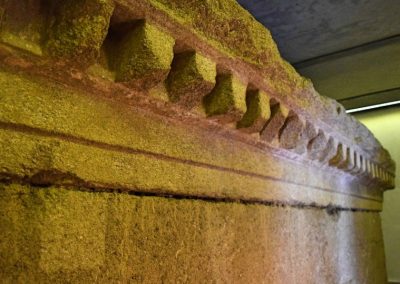